Riemer Convinces Court to Award His Client $219,192 In Attorneys’ Fees and 9% Prejudgment Interest

In Hardt, the Supreme Court emphasized that a fee claimant need not demonstrate it is the “prevailing party” to be eligible for an award. Rather, the claimant need only show he achieved “some success on the merits.” Because Levitian prevailed in both the District Court (for a copy, click here: Download file) and the Court of Appeals (for a copy, click here: Download file), there was no question that Levitian was the prevailing party, and thus eligible for a fee award.

To determine whether Levitian should be awarded fees, the Court analyzed the five Chambless factors, which are:

(1) the degree of the offending party’s culpability or bad faith, (2) the ability of the offending party to satisfy an award of attorney’s fees, (3) whether an award of fees would deter other persons from acting similarly under like circumstances, (4) the relative merits of the parties’ positions, and (5) whether the action conferred a common benefit on a group of pension plan participants.

The Court’s discussion of two of the factors (1 and 2) was the most interesting. With respect to the first factor (the degree of Sun Life’s culpability), Sun Life argued that a finding that its determination was arbitrary and capricious (which both the District Court and Court of Appeals found Sun Life’s determination to be) cannot be enough to satisfy the factor because in almost every case under ERISA, that is the standard that must be satisfied to prevail. If that were the case, Sun Life argued, then attorneys' fees would be awarded each time that a plaintiff prevails.

The general standard of review for an administrator's decision is de novo review. Id. Since Sun Life required Levitian to overcome a higher hurdle to prevail on the merits of his claim for disability benefits, it can scarcely argue that his success in doing so should not be considered evidence of Sun Life's culpability.

With respect to the second factor (the ability of Sun Life to satisfy an award of fees), Sun Life clearly overreached. Sun Life argued that Levitian has not satisfied its burden of establishing the factor. Given that Sun Life is one of the largest insurance companies in the world, the Court was not amused. The Court expressed its displeasure with Sun Life’s argument, stating “[w]hile zealous advocacy is the hallmark of accomplished counsel, Sun Life’s argument verges on the absurd.”

In all, the decision was a big win for the plaintiff, discouraging insurers from arbitrarily denying valid disability claims. 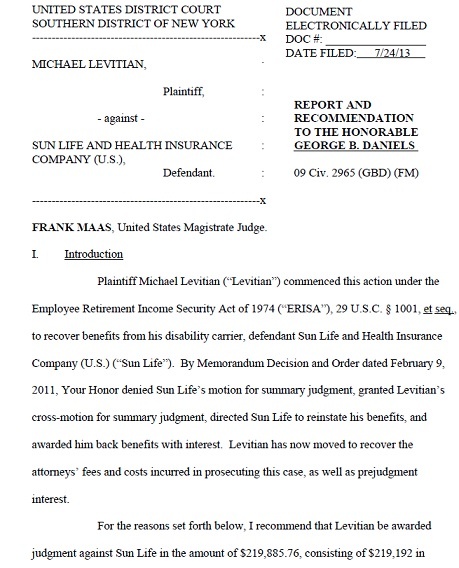