The decision written by Judge Robert P. Patterson meticulously explains why the GSA is not good enough to satisfy the delegation requirements of ERISA. The Court explained that because the GSA states that “UNUM Group is independent…and not [] the agent of First Unum,” the Unum Group employees were not delegated discretionary authority. Thus, First Unum’s own documents demonstrated that the Unum Group employees were not agents acting within the discretionary authority of First Unum. The Court pointed to language from the Plaintiff’s brief:

If UNUM is correct that it could, without satisfying ERISA, merely contract with an 'agent' to assume fiduciary duties in its stead, then UNUM could also delegate those duties to the lowest bidder (and the lowest bidder to an even lower bidder) . . . without even obtaining the consent of the Plan Sponsor [here, Morgan Stanley]. Such a system improperly writes §§ 402(a)(2), 402(b)(3), 402(c)(2) and 405(c)(1) out of ERISA.

Judge Patterson also was not amused at UNUM’s attempt to present the GSA as something that it is not—a document that creates an agency relationship between First UNUM and UNUM Group. UNUM argued to the Court that the GSA created an agency relationship even though Section 8 of the GSA specifically indicates UNUM Group is not an agent of First UNUM. The Court criticized UNUM's argument:

Since First Unum cited Section 7 of the GSA in the declaration it attached in support of its opposition brief, and during oral argument referenced the provisions of the GSA dealing with the relationship between First Unum and Unum Group, it strains credulity that the Defendant was not aware of the content of Sections 8, which appears on the same page of the GSA as Section 7. Given that Section 8 explicitly defines Unum Group employees as independent contractors and not agents of First Unum, Defendant’s agency argument is meritless. (citations omitted).

If UNUM wants to correct this issue in the future, it is caught between a rock and a hard place. UNUM would either have to amend every one of its insuring subsidiary policies by delegating discretion to UNUM Group, or it would have to amend the GSA by removing Section 8. But, Section 8 as presently written served an important function. It preserved the corporate separation between First UNUM and UNUM Group. Without Section 8, First UNUM and UNUM Group would be liable for each other’s actions, thereby defeating the purpose of creating a separate corporation.

The decision in McDonnell paves the way towards limiting the ability of insurers to apply the arbitrary and capricious standard, which functions against the interest of claimants and diminishes their rights in Federal Court. 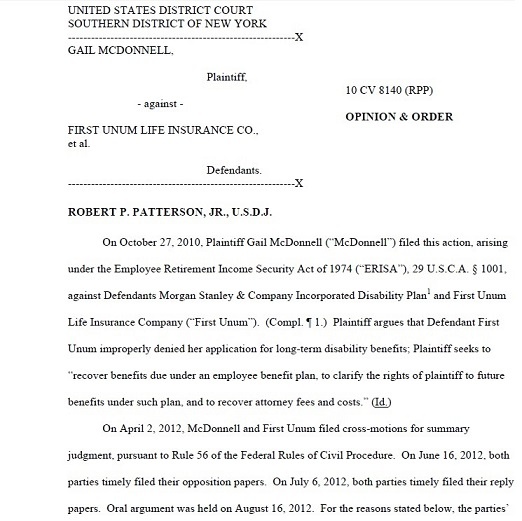